.
From the section: Our Charities 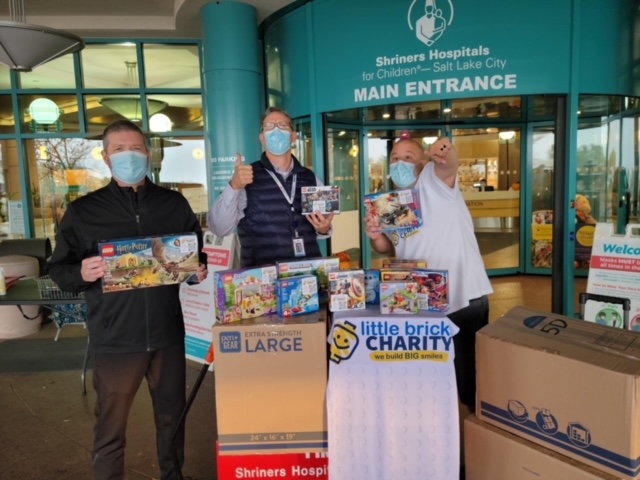 The first snow of the year in Salt Lake City brought more than traffic jams and snowballs this year. Thanks to the great people of LittleBricks Charity, the children receiving cancer treatment at Shriners Hospital had a special day, too.

Since 2019, LittleBricks Charity has made it their mission to build BIG smiles on children who truly deserve to smile, when they need it most. And that's exactly what they do; brick by brick. While these sweet kids are facing days full of doctors, unfamiliarity, and pain, they need time to be a kid. As their bodies and daily lives face a multitude of changes, one thing remains the same; kids want time to play. LittleBricks Charity works hard to make this possible for these kids right in the hospital. For over three years, this group has delivered LEGOS to hospitals and children in need of time to be a kid. In a short amount of time, they have managed to build smiles on over 3000 children. Whether it be New York or Las Vegas, these kids all need the same thing, and LittleBricks makes it happen.

So as that first snow fell over Salt Lake City, LittleBricks made the journey to Shriners Hospital downtown, with large boxes filled to the very top with LEGOS. Not only did they get the opportunity to meet the incredibly caring staff and tour the building, but they also were lucky enough to meet some of the children receiving treatment at Shriners. This isn't the ideal situation for any kid to be in, but the kids even told the people of LittleBricks how kind everyone is that works there.

After that visit, the great people from LittleBricks got to leave knowing they made the children's day, and that they are in great hands as they face these battles. Jaysen Greenleaf, who had the opportunity to be a part of this delivery, said It was an incredible feeling to know that you were helping out some kids who were doing their best just to get better. I sincerely hope everybody has the opportunity to do something nice, kind, and charitable for someone to experience the same feeling.

We encourage you to check out more of the great work LittleBricks Charity does, and find out how you can help.